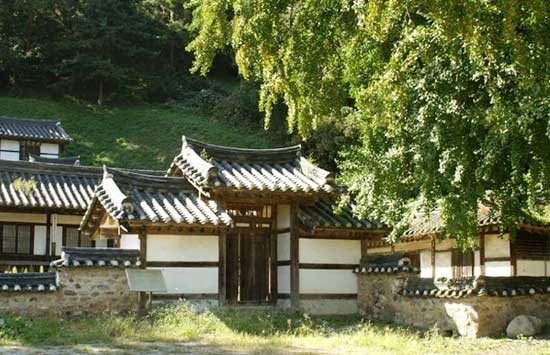 The Pungnim Jeongsa was founded by Hosan Park Moon Ho, Neo-Confucian scholar in the late Joseon dynasty, in 1889 (26th year of king Gojong) to study Neo-Confucianism and teach students.
The building is a wooden tile structure consisting of 6 and half rooms at the front, 2 rooms on the side, and paljak-style roof.One room on the right side is kitchen, and there are 2 ondol-style living rooms, and the lecture hall of two room size with wooden floor.

Behind the main building, there is Huseong Yeongdang built in 1906. It is the place where paintings of top philosophers of Neo-Confucianism such as Ju Hi, eie, Song Si Yeol, etc. were enshrined. In 1921, the painting of Park Mun Ho was added to it. The painting was drawn by Lee Chun Hwa referring to his photo taken in 1912.