Oh Jang Hwan was the poet who was born in Boeun and produced poems most actively in the Korean literary field from the 1930s to the 1950s, and is considered as one of poets representing Korea.
To commemorate his literary world and his life, and appreciate his literary achievements, the county has held the Oh Jang Hwan Literary Ceremony since 1996.

In 2006, his Literary Hall and the house where he was born were constructed. The literary ceremony centering on the Literary Hall, attended by literary writers across the country, local residents, and students is designed to enhance emotionally prosperous life, and nourish cultural environment where people put high value on literature and literary writers. 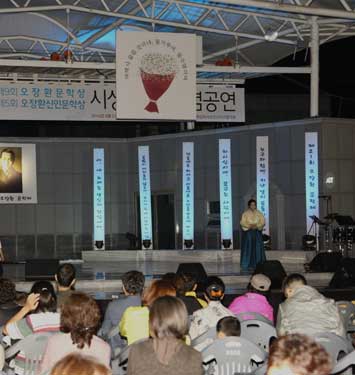 Oh Jang Hwan sharply felt the contemporary contradiction between colonial capitalism and modern civilization, and tried to embody esthetic life. The Oh Jang Hwan Literary Award aims at contributing to the development of Korean literature by awarding a poet who published an excellent book of collected poems every year, to commemorate the literary achievements of him.

The Oh Jang Hwan Literary Award is only conferred on poets. It covers all the books of collected poems written in Korean language published within the past two years as of June of that year. There is no criteria for writer's ideological trend or style.

The Managing Committee of the Oh Jang Hwan Literary Award selects three screening members among established poets and critics, and let them examine books of collected poems written in Korean language published within the past two years as of June of the year. During August, the winner and the title of his book will be announced. The prize money and medal will be awarded during the Oh Jang Hwan Literary Ceremony in September.

Publishing the awarded work and comments on it

The awarded work, the awardee's comments, and opinion of the screening committee of the Oh Jang Hwan Literay Award are published in the fall issue of Silcheon Munhak every year. By doing this procedure, we secure its fairness and authority.